I left our last guild meeting with a bunch of strips convinced I was going to make something log cabin-ish. 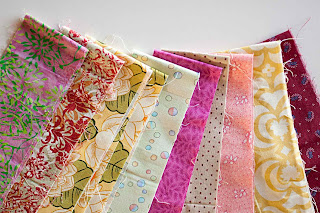 Remember these were the strips?
The mix of styles made me nervous.  I've got batiks, brights, traditional, modern, reproductions.  BUT!  If you look at the strips with fuzzy eyes, the colors actually flow pretty good.  The one on the right stands out more because it's darker than the others.  I decided it should be a feature.  But how?  It could be the center of all the log cabins.  At this point I wasn't sure I still wanted to go in that direction.
I went to my flickr favorites for another idea.  Check these out.  Yes!  That's what I want to do.  Tiny, wonky, scrappy stars.  My theory was the fabric pieces will be small and instead of seeing the prints you will see the colors.  I have always wanted to try this kind of star and this was a great excuse to play.  I used this tutorial for wonky stars. 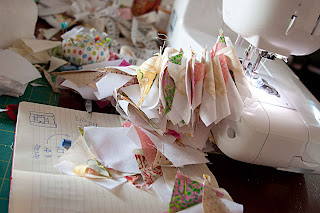 Instead  of 4.5" pieces I used 2.5".  I chain pieced my way through the wonk.  I picked pieces randomly from a bag to make sure they were mixed up.  I wanted it to be as scrappy as possible so there would be lots of movement with the finished stars. 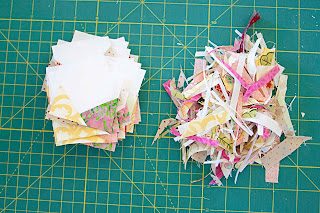 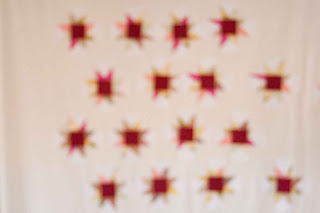 I took this picture out of focus on purpose to show you the colors and not the fabrics.  The dark centers unify the stars but the scrappy colors make them dance.  Or should I say twinkle?  ; ) 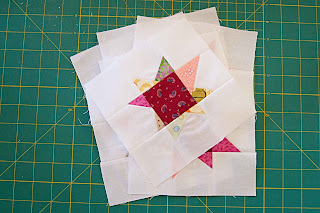 I'm almost done piecing the stars.  I've had a Coldplay song stuck in my head as I work.  You know the one that goes, "look at the stars, look how they shine for you."  I think I might incorporate that into the back somehow.
I'm supposed to have this done by Monday for our next guild meeting. Wish me luck!
-A